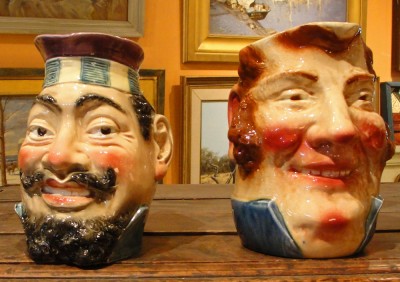 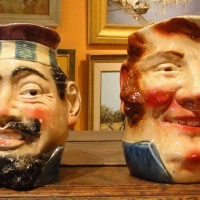 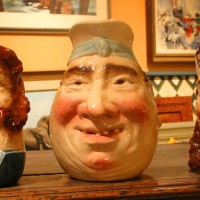 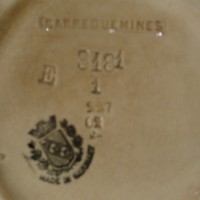 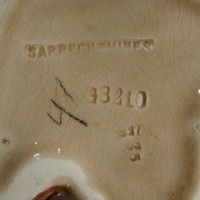 An Outstanding set of Four Sarraguemines Signed and Numbered Character Ceramic Glazed Pitchers among them “John Bull”, another “The Butcher”, having the very rare “Made in Germany” mark, French ca. 1875-1900


The pottery at Sarreguemines was established in 1784. Then the territory was French, but it became German ninety years later. The company originally made only earthenware but by the turn of the century was producing fine stoneware and using unusual mixtures of clay for their body.
They enjoyed great success during the Empire period and Napoleon, who was a patron, conferred the Légion d’Honneur on Paul Utzshneider, the director of the company. A variety of colours and designs was used and a wide range of domestic utility, decorative and ornamental wares were made. By the middle of the nineteenth century, though, the colour range had reduced to shades of brown and beige. In the second half of the century a range of domestic wares was introduced with relief decoration in the form of leaves and vines.
In 1876 after the Franco Prussian War, a new plant was opened at Digoin in France and the production of earthenware, stoneware and porcelain was carried out there well into the twentieth century.

Pin it
Please email us for more information on this item
This entry was posted in ACCESSORIES. Bookmark the permalink.