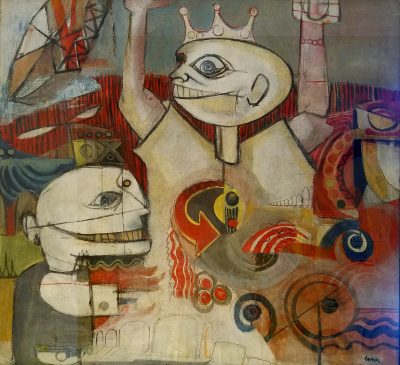 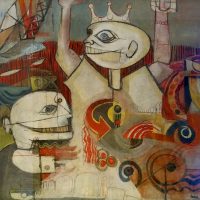 New-York born artist William Gropper was a painter and cartoonist who, with caricature style, focused on social concerns, and was actively engaged in support of the organized labor movement throughout his career.  During the 1930s, working as a part of the Federal Arts Project, he produced some of the most gripping social protest works of the Great Depression. Subjects included industrial strikes and incidents of strike breaking, especially in the coal mining and steel-production centers. He did much illustration-cartoon work for the New York Tribune newspaper, Vanity Fair magazine and the politically ‘left-wing’ publication, “New Masses.” Gropper’s painting, Youngstown Strike, has received much attention for its strong, social-realist impact and was apparently prompted by the extended strikes staged in 1936-37 by workers at the Youngstown Sheet and Tube Company, Youngstown, Ohio.  During these years chaos frequently reigned throughout much of the city. In one incident, following a savage confrontation with police guards by workers and their families, the police tear gassed and shot at the workers; two strikers were killed and twenty-eight injured.  Gropper visited Youngstown during this period, and commented on the incident in an article and a series of descriptive action sketches published in The Nation. Some of his other pieces focused on the hypocrisy of government figures, especially members of the United States Senate. As a young man, William Gropper was a student of Robert Henri and George Bellows at the Ferrer School from 1912 to 1915.  He did fine-art painting on the side until the early 1920s, and had his first solo exhibition in 1936.  In 1938, he completed a mural for the Department of the Interior in Washington DC. Sources: Howard E Wooden at Butlerart.com Dictionary of American Art by Matthew Baigell
Pin it
Please email us for more information on this item
This entry was posted in ART. Bookmark the permalink.