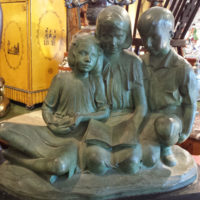 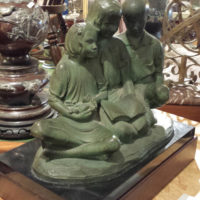 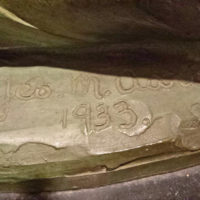 A sensitive and beautifully rendered portrait of three siblings in cast bronze by George Manuel Aarons, signed in the bronze and dated ‘Geo. M. Aarons, 1933’; mounted on marble base; also includes set of four original plaster models, one group plaster model and one of each individual child. Prov: children of Mr. and Mrs. Meyers of West Newton, MA

George Aarons was a distinguished sculptor who lived and taught in Gloucester for many years until his death in 1980. He had, according to all accounts, many students in the area and he designed Gloucester’s 350th Anniversary Commemorative Medal.

Characteristic of his era, George Aarons was among the foreign-born American sculptors of the early 20th century who started their careers as academicians and evolved into modernists and increasingly abstract artists.

Born in St. Petersburg, Russia, Aarons immigrated to the United States at the age of ten. He first attended the School of the Boston Museum of Fine Arts and then moved to New York City to study with Jo Davidson, and other Paris-trained masters at the Beaux-Arts Institute. Aarons eventually returned to the Boston area and established studios in Brookline and Gloucester, Massachusetts. During his lifetime, he was recognized internationally and won several prestigious awards.
Over thirty pieces spanning the length of this sculptor’s career were featured in this exhibition, including work in various medium bronze, wood and original plasters. Like his contemporaries, Aarons experimented with direct carving in wood, and he was one of the few academically-trained sculptors who consistently cut his own works in marble. His early work was classically-inspired figurative work, along with sensitive portraits. Some of his most powerful sculpture comes from his middle period, when he worked through his emotional pain following the global realization of the Jewish Holocaust. He depicted humanity deep anxiety over this tragedy with figures that are at once symbolically-charged and movingly beautiful. Aarons late work consists of radically simplified forms that continue to reference the human form and often are carved directly in wood and stone.
Aarons summered and taught classes on Cape Ann for many years before moving to Gloucester full time with his wife about 1950. While Aarons is best known locally for his domestic-scale works, he also executed numerous monumental, public commissions that can be found throughout the United States in cities such as Washington, D.C.; Baltimore, Maryland; and Cincinnati, Ohio; as well as in France and Israel.