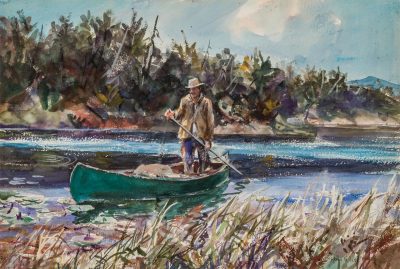 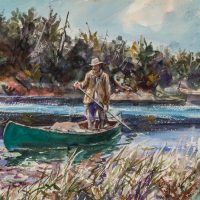 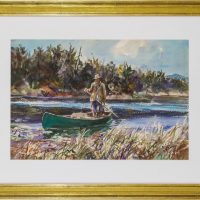 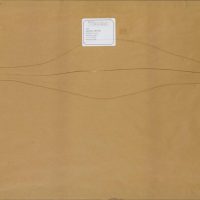 John Whorf (1903-1959)
American
The son of a commercial artist, John Whorf showed a pprecocious talent for art.   At the age of fourteen he traveled from his home in Winthrop, Massachusetts, to attend classes at the nearby School of the Museum of Fine Arts in Boston.  That same year, he began studying in Provincetown under Charles Hawthorne, E. Ambrose Webster and George Elmer Browne.  Whorf’s life was drastically changed, however, when he was temporarily paralyzed in a serious fall at age eighteen.  He said of that time, “Like most boys, I was full of energy and looked for exercise and excitement.  After the accident, all that vigor of youth, that longing for adventure and romance, I put into my paintings.”

Whorf eventually recovered and traveled through France, Portugal and Morocco, studying at the École des Beaux Arts and the Académie Colarossi while in Paris.  During his travels, Whorf concentrated on watercolors, capturing the subtle blend of hues and play of light and shadow in his landscapes and urban scenes. In 1924, he had his first one-man show at Grace Horne Gallery in Boston, and began studying under his most influential teacher, John Singer Sargent.  This was the first of many great exhibitions in both New York and Boston for the young artist.  Throughout his career, he would show his watercolors with the Boston Society of Watercolor Painters, the Pennsylvania Academy of the Fine Arts and the Art Institute of Chicago, as well as at Vose Galleries annually between the years of 1944 and 1951.  At the culmination of his career, Whorf was elected a member of the National Academy of Design and relocated to Provincetown, Massachusetts, where he remained until his death in 1959.