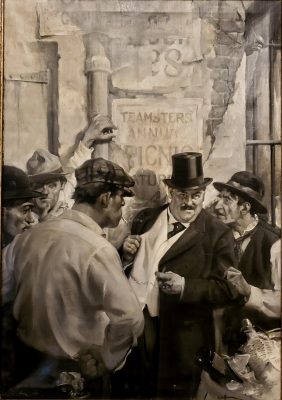 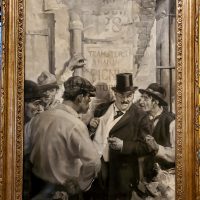 Charles Edward Chambers was a classical painter representative of the old school. His technique was impeccable, anatomy perfect, compositions compelling, and color harmonious. One could infer from his polish that he was a product of the French Academy, with years of classical training.

Yet he was born in Ottumwa, Iowa, in 1883; his training was at the Chicago Institute and in New York at the Art Students League with George Bridgman. In fact, one of his important teachers was Fanny Munsell, who later became his wife. She was an accomplished illustrator in her own right as a contributor to Cosmopolitan, Woman’s Home Companion, and other national magazines. Chambers clearly modeled his style and technique on hers. Unfortunately, her career was cut short by her early death in 1920, and now sadly almost forgotten.
Some of Chambers’ early professional illustrations were centered on a series of short stories about a clever con man know as Get Rich Quick Wallinford, whose antics gave Chambers opportunities to depict events of dramatic action and humor, enhancing the stories and the artist’s popularity in the process. A later popular series of stories of rural China by Noble-prize-winning author Pearl Buck was published by Cosmopolitan in the 1930s with Chambers’ sympathetic interpretation of peasant families caught up in the intrigues of the Chinese Warlords. Chambers worked under exclusive contract for Cosmopolitan for several years, and, in addition to Buck, illustrated work by such authors as Louis Bromfield, Faith Baldwin and W. Somerset Maugham.
It was Chambers’ use of color that was his greatest strength. He had become a regular contributor to Harpers Monthly in the 1910s, often with the lead story. His fiction illustration was expanded to include most of the major women’s magazines and for their covers as well, including a dramatic series of cover designs for Redbook.
In the 1920s Chambers was commissioned by Steinway & Sons to paint portraits of the leading pianists of the day, including Sergei Rachmaninoff, Josef Hoffman, Paderewski, and Alfred Cortot, which were widely reproduced. A parallel popular series of paintings was commissioned by Chesterfield (cigarettes) for billboard advertising among which was cited one of the most beautiful posters ever painted, as reported by the trade publication Advertising Outdoors in 1931.
His billboards for Palmolive Soap also set high standards for the field of outdoor advertising, and another outstanding poster was his painting for the Red Cross in 1933, posed for by Pauline True, his most frequent model and subsequent wife. Among Chambers’ numerous awards was the second Altman Prize at the National Academy of Design exhibition in 1931 for his portrait of watercolorist and fellow-illustrator John Alonzo Williams.
One of the best analysts of Chambers’ working methods was the art editor John D. Whiting, whose book, Practical Illustration: A Guide for Artists, in 1920, outlined the artist’s process:
“Probably no living American better typifies the successful illustrator than Charles E. Chambers. How does he do it? The student will find in Chambers’ illustrations a good working model of practical illustrative technique. If you have access to any of these paintings, do by all means study them well. If this is impossible you can at least study the prints through a magnifying glass. You will find that there is nothing extraordinary or abnormal about the workmanship. They are remarkable rather for the absence of any particular mannerism, and this is one secret of their successful reproduction”.
The original paintings by Mr. Chambers are exceedingly round and soft in treatment. The passages between the different surfaces are seldom hard edges of one plane against the other. They are almost always opened up by an additional value which, however strong the contrast, is soft enough in edges to produce an atmospheric effect.
These drawings range from clear white to jet black and therefore print well, whatever the size of the edition. But the transitions are so open and gentle that they often appear to be done in a limited range. When reduced they are clear enough to be intelligible to the literal, and yet soft enough to please the eye of the connoisseur”.