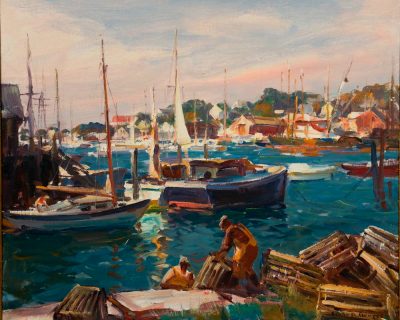 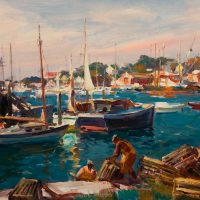 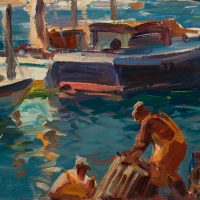 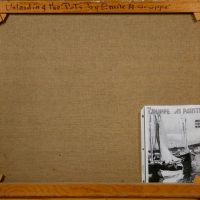 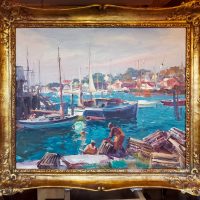 Emile A. Gruppe "Unloading the Pots"

Emile Albert Gruppe (1896-1978) American Emile A. Gruppe was born in Rochester, NY to Helen and Charles P. Gruppe. He lived the early years of his life in the Netherlands as his father was a painter with the Hague School of artists and a dealer for the Dutch painters in the U.S. The family returned permanently to the U.S. in 1913 with the rumblings of  World War I troubling Europe. As early as the 1930’s Emile found his way to Gloucester, MA and the area known as Rocky Neck, one of the earliest artist colonies in the U.S. Here he established himself as a well respected painter and teacher, opening his Gloucester School of Painting (1040-1970) with his mentor, John Fabian Carlson. Later the village of Cambridge and town of Jeffersonville, Vermont with their surrounding mountain scapes became a second campus for his students. Still later, as he grew older the good fishing and warm breezes of Naples, FL became another source of inspiration for his canvases. During his lifetime he received many major awards for his work from national art institutions: The National Academy The Salmagundi Club North Shore Arts Association Rockport Art Association Allied Artists of America He is represented in many major museums and collections worldwide and has held exhibition throughout the U.S. He also wrote and had published three very popular and well known books on painting, noteworthy as an important source for plein air painters even today: Gruppe On Painting(Watson-Guptill 1976), Brushwork (Watson-Guptill 1977) and Gruppe On Color (Watson-Guptill 1979)