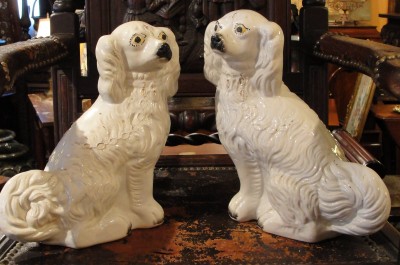 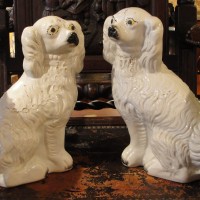 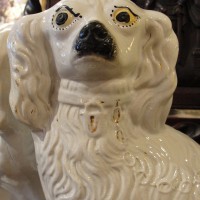 Staffordshire potters modeled their figures after dogs known as Cavalier King Charles Spaniels, named for King Charles II of England who was constantly surrounded by these merry little dogs and gave them free run at court. His opponents accused the King of “Playing with his dogs all the while, and not minding his business.” Lord Rochester made this poetic observation, “His very dog at Council Board, sits grave and wise as any Lord.

It was Queen Victoria that brought the Cavalier King Charles Spaniel to prominence. And it was her love for her own spaniels that attracted the attention of Staffordshire potters in the mid-19th century. Her beloved companion “Dash” became famous and the subject of many artists. On the day of her coronation, she hurried back to Buckingham Palace to perform an important duty. She gathered her skirts and ran up to her room to give Dash his bath.

Pin it
Please email us for more information on this item
This entry was posted in ACCESSORIES. Bookmark the permalink.