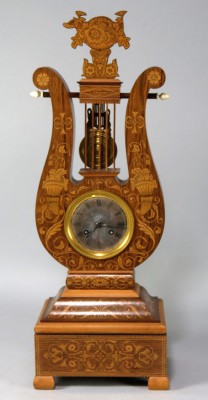 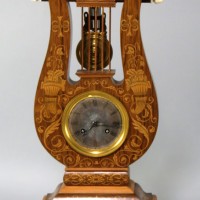 Douillon, St. Nicholas, French Empire Lyre-Form Walnut Clock with Marquetry Inlay, signed to rear of backplate Douillon, ca. 1825-1835
The walnut case is inlaid with a light-colored wood inlay having penwork.  The case is in the Greek style and surmounted by an inlaid crest and ivory finials over a silvered dial with Roman numerals. The clockworks are based on an eight day movement with the countwheel striking on a bell and with anchor escapement and upright crutch linking to the ornate visible pendulum suspended above the dial. Douillon was recorded as working in St. Nicholas, France from 1830. This item is SOLD


Pin it
Please email us for more information on this item
This entry was posted in ACCESSORIES. Bookmark the permalink.